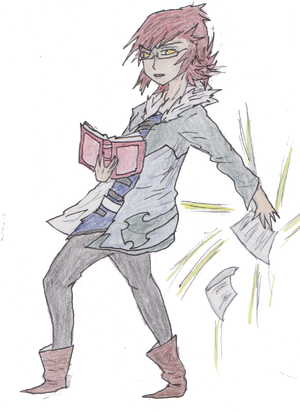 Sulsaga Ninvenus Ninvena is a character in Ex Libris Lucifer. A member of the Ex Libris Librarian Union, Sulsaga is a newly promoted researcher of tomes and the realm of tome magic. A young and mild-mannered librarian, he has yet to gain the trust of any of his coworkers, and makes little effort to change that. Those close enough to the quiet youth note his passion for the scribal arts as well as his impeccable talent in recreating fractured or veiled spells, but universally note his social skills need work. He keeps him opinions to himself and rarely speaks; but inside dwells a grand dream and a love for history and the arcane.

Sulsaga's main talent is his ability to fluidly interpret pages with his above-average Reader skill. As a librarian per se, it is not expected for one to be so specialized, but considering Sulsaga's position requires investigating and perhaps even testing "lost" spells in order to further explore history, it isn't very far-fetched. Besides Reading, Sulsaga has some experience with Translating, although his Scribe talent is lacking. 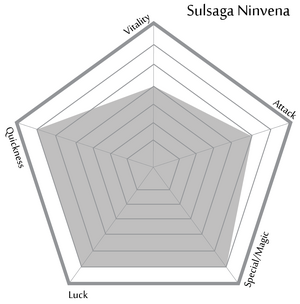 Sulsaga has short length burgundy hair that curls up at its ends and at the back. Bangs flat over his forehead and spring up near his right eyebrow. A pair of loose-fitting spectacles almost always grace his face. His primary appearance is the usual garb for Librarians; brown boots, black tights, and a navy blue tunic. Over this ensemble, he wears a long peacoat with a fur collar and a gray and blue color scheme. On his waist is always a white belt that holds in place a book, most often used for reading or referencing spell pages or simple pleasure reading.

Sulsaga was brought up as the child of an expatriated sailor and his wench of a wife, born seven years before the start of the Ten Years War. His father was a passionate revolutionary who utterly despised, with all of his being, the compliant and haphazard politics of the disillusioned Alliance Faction. A so-called "Freedom Fighter", he nearly abandoned his wife and took Sulsaga with him in pursuit of justice in the ensuing war. Sulsaga was thus a first-hand witness, starting at a ripe yet self-aware age of seven years, to the atrocities and injustices of battle - and the passionate self-sacrifices of those involved, both sides believing they were correct and righteous.

A young, naive Sulsaga was of course naturally inclined to ally with his father in terms of beliefs, but this soon changed after his father's death four years into the war. Sulsaga, now 11 and a veteran of surviving war ships and smuggling goods, continued his life on the freedom ship his father served on. This lasted a very little time before the ship was sunk and Sulsaga was captured by Alliance forces. Due to his young age and non-combat active status in the battle he was captured, Sulsaga was not executed or punished, instead sent to an Aeternaen corrections facility and educated in all matters Alliance intelligence.

In these academies, perhaps better described as rehabilitation camps for complying Freedom Faction members, Sulsaga spent the next 6 years until the end of the War. Now an educated, legally Alliance bred citizen, Sulsaga's natural intelligence and mild-mannered disposition lent him a wide reputation among the best of his class in Librarian circles, and his natural talent in Reading spells did not hold him back. After seeing his father for what he was - a poor, disillusioned merchant turned soldier who nonetheless had admirable, if not quite entirely plausible, beliefs - Sulsaga rejects his baseless heritage and decides to spend the rest of his life in a peaceful, fascinating field that separates him from combat and political/philosophical debates, and is effortlessly inducted into the Guild of Librarians.

It took him six years to go through further training and prepare himself for his career as an Arcane Archaelogist, all six years that he used to better his skills and increase his knowledge of history, a subject that intrigued him, and without delay he became a practicing archaelogist. The next five years were thus spent going about his job and slowly rising the social ladders of his position.

An Arcane Archaeologist is a member of the Union of Librarians that deals mostly with history and discovering/interpreting/using newly discovered tomes of ancient magic. Sulsaga's area of expertise usually does not focus on combat or involve itself in governmental affairs like other branches of the Union, but instead is mostly independent and quite scarce.

A cheap yet sturdy bag that Sulsaga wears when traveling, which is most of the time. Includes most supplies needed for extended travels: basic toiletries, a change of tunic/tights/underclothes, a spare pair of glasses, and rudimentary stationary, as well as a small and blank spell book. A separate compartment holds the little tools Sulsaga needs for excavations or examinations, such as a small pick, a few knives, a magnifying glass, a page duster, etc.

The book that Sulsaga always has attached to the back of his belt. It usually changes, ranging from subjects on history to social commentary to adventurous fiction, but his favorite is Alls Day Funeral: the Annotated, Unabridged Volumes, an extremely long 6-volume fiction epic that weaves nihilism and various social commentaries into a tale of a soldier's long, eventful life.

1/3
Community content is available under CC-BY-SA unless otherwise noted.
Advertisement