Visit this page for Shirayuri's theme, "Sands as White as Snow."

Shirayuri Konohana is a 20 year old woman, with blood of Izakami man and a Granea woman. She traveled to Granea as part of a culture exchange agreed upon by her family. Her father's good friend, Thales, a native of Granea, has offered his help in guiding her around the island nation. Shirayuri possesses a rare ability to specially fold paper into intricate shapes. Her father has heard of the importance of paper and book mages in Granea, and is hoping that his daughter can find some use for his talent as well. Shirayuri usually has Petit mal seizures, which causes her to randomly stop her in middle of something or in mid sentence sometimes while blankly stair for few seconds before going back to normal. 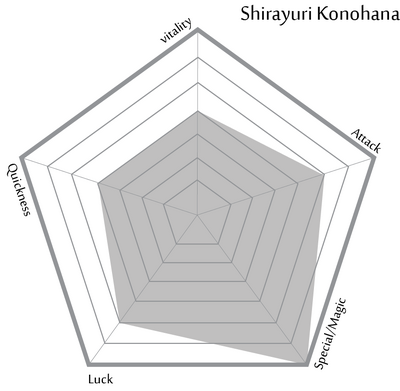 Shirayuri is a very quiet and calm young woman, she has interest in world and nature and wish know more about it. She been very shelter by her father for most her life due her episodes she has, afraid someone could take advantage or capture her during these times. She knows about her disability but refuse to let it stop her and promise herself to over come this and make her family proud of her. Shirayuri has love and hobby of origami, and loves to preform these during her free time, with the right kind of paper and seal they can turn to magical creatures or objects of what they fold into, she hope this skill will let her father give her more freedom to help home land.

Shirayuri is very beautiful young woman with long white hair reaching down to her thighs and bright golden eyes. She commonly wears a white shoulderless kimono with the Sodeguchi separated from the main dress and pale pink koshihimo ribbon. The main dress has v cut in the back with and one in front the skirt which reach mid way of her thigh with back going pass her knees. Her kimono also has pink petal deigns with a silver lilies. Finally she wears white tights and sandals.

Shirayuri is the daughter of an Izakami man named Tsukuyomi and a Granean woman named Hemera. As a young man, Tsukuyomi wanted to explore the world, see new lands, and experience different cultures. While he was next in line to rule Izakami, he wanted to spend his youth exploring as much the world as he could before taking his duty to his homeland. As a young woman living in Granea, Hemera was pretty close friends with a man named Thales, having known him since they were children. Since they both had no home or living family, they lived together. Thales joined the Alliance Faction during the war, while Hemera took to a life of traveling between islands. One day, the ship she was on was attacked by the Freedom Faction, and she ended up as one the few survivors that were captured and sent to a POW prison.

A few weeks later, Tsukuyomi's ship was shot down by the Freedom Faction, killing quite a few members of his crew, while he and the remaining survivors were captured. The Freedom Faction was uninformed that their latest prisoner was the heir of Izakami, a man whose leadership could be proven with his insignia. During this time, Thales tried to rescue Hermera from prison as soon he heard about her capture. Blinded by anger, he rushed into the prison alone, believing he could save her, only to fail and get captured. Tsukuyomi noticed Thales and asked what would cause a man to break into a POW camp with such conviction. Thales told him about the woman he had his heart set on saving. Tsukuyomi offered his help to Thales, who accepted it gratefully. Tsukuyomi then showed his insignia to the guards and demanded their release. He also told them to take him and Thales to where the women were kept. When Tsukyomi got there, he was disgusted. The women were nothing but mere playthings to guards, chained to the ceiling, stripped from their clothes and freezing. Tsukuyomi commanded the guards to release all the women or risk damaged relations with the kingdom of Izakami, an edict that was obeyed for fear of Izakami allying itself with the Alliance Faction.

With his ship destroyed, Tsukuyomi was stuck on Granea, but Thales offered his protection in thanks for Hermera's freedom. While waiting for Izakami to provide him with a new ship, Tsukuyomi spent his days conversing with the Freedom Faction leaders. He spent especial time with Hemera and Thales, learning more about their home. Hermera was traumatized from her time at the POW camp, and Tsukuyomi's anger at seeing her and the other women's suffering began to change his life. He promised to make sure no one else would have to suffer like them, and began to spend a lot of time helping Hemera recover. She enjoy this time spending with him, even making her laugh again and interest in his story of his travels and his homeland Izakami. As two spend their days together they soon have feelings for one another, but Tsukuyomi was worry about breaking her heart on the day he will leave. When they day finally came, Thales knew Hermera would be happier with him away from the war, getting to know Tsukuyomi through pass months and grew to trust him and see him as close friend. So before ship set sail, he sneak Hermera in the ship, once on the ship she was found by Tsukuyomi's men and she was taken to him. Shocked at first, he was happy she want spend her life with him and promise marry her as soon they reach Izakami.

Hermera was very timid in her new home, people judge her at first but as months path gotten know her and ask question about her homeland. She was pregnant with Tsukuyomi's child when they reach Izakami, as he promise they marry a week after his return. During the next Cherry Blossom season Hermera gave birth their their daughter, Shirayuri. Hermera loved her daughter and devote her life, as the years pass Shirayuri was well taken care of by her parents and enjoy time she play with them. When Shirayuri was 8 when she learning how to fold Origami she got a small paper cut and line of blood was left on the paper crane, when she sent the crane to fly to one the paper walls and cutting through the wall. Afraid what she did, her mother explain that what she did was Book Magic from her land, a different form magic that was in Izakami. Hermera was interest how she perform it with a origami folding, she learn more about this new form of Book Magic while teaching Shirayuri it and other information about Granea even teaching how to read it language something they use have secret messages.

When Shirayuri turn 10 she start randomly blanking out and drop anything she does, while she fine afterwards her parents were worry for her. Not sure what causing this they started keeping closer eye on her, and making sure one them is with her when she out the household. Shirayuri started feel she was in cage, wishing go outside to see animals she loved to feed, to see sky and feel the breeze of the wind. Her mother felt sorry for her, she always took her with her when going out trying her best to make her feel like a normal child. At age of 13 her grandfather the current ruler of Izakami passed away and her father Tsukuyomi took up leadership, because of his her father never spend much time with her or her mother and felt she lost her father. Hermera however still spend as much time with her, teaching as much she can about Granea, book magic, even other skills like cooking and drawing, as long she has fun Hermera is happy.

By the time Shirayuri turn 15 her mother fell ill and was bedridden. Hermera grow weak after each passing day while Shirayuri did her best to take care of her. During any time Tsukuyomi spend his time with his loving wife, hoping she will recover but after seeing she only getting worst know she not long for this world. During Hermera final hours she give Shirayuri a crystal she hold close to the Nyx's Eye, she told her she wanted give it to her once she become a woman but knew she could live that long. Her final words to her were, "You're the link of our two nations, help your father to bring Granea and Izakami together." After the death of her mother Shirayuri felt alone, trap in a cage. She only able see her father once after few days, she was always guarded and never letting her leave her home. All she has was knowledge her mother give to her.

Five years later for first time in long time, her father took him with her to see someone of great importance. This man was Thales, one who her mother escape the 10 Year War. He came in behave Granea to hope to create a relationship with the two nations, hoping he would see Hermera again but sadden when learn of her death. Shirayuri was afraid of him at first, he was a large but strong build man, with scares, a eye patch covering his left eye and his right foot was missing. Thales saw him and told her she look so much like her mother, Shirayuri took this chance and ask the man to take her to Granea. Shirayuri beg her father let her go, wanted to see land her mother grew up with, the creatures and culture of. Tsukuyomi was very unsure, know of his daughter contention and only saw the bad side of Granea, however he knows Thales will protect Shirayuri during her visit and knows it she is much like him during her age, wanted to explore outside of Izakami. Tsukuyomi let Shirayuri go with Thales and give her the blade the Izanami, a replica of the sword he took on his travels. Once reach Granea she was place under the watch of Oliver Black, a man who pretty timid around her but does his job to keep her save. She currently been at Granea about a month, learn and experience more of it, however she still feels she trap in cage, still overprotected by her frailty.

Focus more on wildlife and learn more about them and even keep info about her encounters.

A smaller replica of the Katana her father carries The Izanagi during his travels around world when he was young. The blade is not meant for battle but for a symbol of her invite the world and it knowledge to her mind and soul. The blade is sharp enough for battle and light enough for Shirayuri to wield however she rarely uses the blade unless she force to.

A Crystal she receive from her mother final moments. The Crystal is black as the night sky with small glowing light much like stars of the night sky. If one looks closely they can see the Constellations. Shirayuri hold this crystal close to her and looks at it to remind her of days she spend with her mother, the days she felt like normal girl before her death and the loneliness she felt after losing her.

A red back she carries to hold all her Origami foldings and paper to make them for her spells. And all her notebooks for her study and research she has made during her trip.

Community content is available under CC-BY-SA unless otherwise noted.
Advertisement